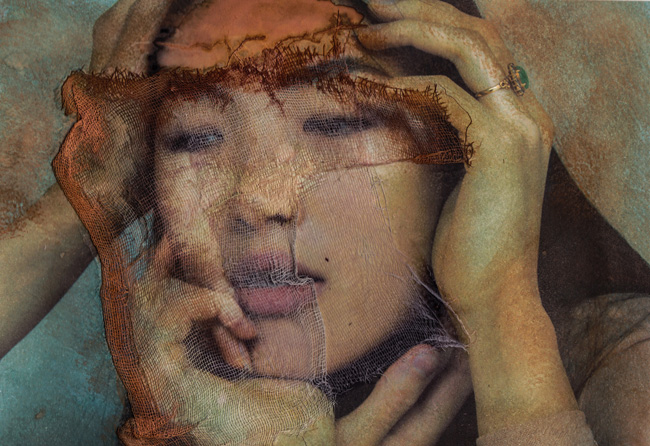 The ten positions deal with provocative subjects, superficial scratches, penetrating layers. They get under the skin.

On strange days, the temptation is great to only talk about oneself, out of the depth of memory, of curiosity, of experiences, that one has dreamt, simply from the archive; not to talk about other things, from encounters, from presumptions, stories from museums.

“Reiz” is curated by Eva Bertram, freelance photo artist and lecturer at the Neue Schule für Fotografie and the UdK Berlin.

Eva Bertram’s “Freie Klasse” has existed since 2013 and is a workshop format for the supervision of personal, self-chosen photo projects that arise outside of school or student frameworks. The motto “obviously inconspicuous” serves as a point of reference.

“Ich bin hier – Estoy aquí” (I am here) is a journey into the subconscious in which Brenda Alamilla traces personal violence and abuse experiences from her childhood.

In doing so, she links fragments of memories and dreams with references to the Mesoamerican protective spirit Nagual, which appears in animal or plant form in dreams.

The series, which consists partly of biographical material, photos, collages and poems, is the basis of a long-term project deals with the ubiquity of violence that many women in Mexico experience in their private and social context coming from their family.

Every year around 300 people die lonely and unnoticed in their homes in Berlin and are often only discovered after weeks. I had the opportunity to enter such an apartment and to photographically document the deceased’s apartment and legacy. What affected me most was the condition of the apartment, which was in stark contrast to the high income and savings of the 76-year-old man, a retired bank employee. Despite visiting the apartment twice, I was shy about going through personal things such as a file named “divorce”. I would have liked to know what circumstances could have led to such personal neglect and social isolation. Based on the what I found, all I can do is guess.

“Senke den Blick” (Avert Your Eyes) is a series of self-portraits contemplating the perception of shame, physical and emotional self-acceptance and female self-consciousness. Looking at notions of nakedness, monthly cycles and bodily changes after giving birth, Steffi Drerup explores the concept of identity and the (fe)male gaze.

In the Hamburg Emigration Museum, I found my grandfather’s name on the Monte Olivia passenger list with the destination Rio de Janeiro: Willy, 20 years old, carpenter, May 1926. In the photo book ÜBERS MEER I embark on an imaginary journey and follow him to this place of longing, using my own family pictures, archive material and quotes from old letters.

As a child, I was fascinated by a photograph from this time: Willy sits on a white horse and rides through an exotic landscape. I could never understand that he returned to Germany after a few years. He had to go to war and died in 1945, at the same time that Monte Olivia was sunk in the port of Kiel by bombing. Maybe it was this photograph that triggered an insatiable wanderlust in me too.

I look, inspect. seek insight. I’m curious, something is happening here. I press the trigger, random.

“A panic attack is a clearly distinguishable episode of intense fear during which the following symptoms can appear within a few minutes: the feeling of suffocation, numbness, shaking, a feeling of oppression, vertigo, a feeling of alienation. Anxiety attacks are recurring and unpredictable. They are not limited to a specific situation or special circumstances “. (www.icd-code.de)

In her long-term photographic project, Jeannine Jirak tries to follow her fears and express them using her own body. Dealing with this theme delves into the past. The connection to bygones is established through experimental photographic techniques and biographical archive material.

The basis of this work is a recurring pattern in my family, in which former war enemies repeatedly appear.

Through landscape shots and stills taken in the footsteps of my German grandfather in Russia, with excerpts from photos in my Russian grandfather’s apartment, using self-portraits and archive material from the family albums, I explore the emotional impact and imprint of war and tell my story about the memory, pain and trauma I inherited from my grandfathers.

Aren’t we all looking for a piece of pristine world, a place in the community and cohesion in the microcosm? Is that not the attraction of escaping into nature, indulging in idyll? The search for connection and meaningfulness leads different people down different paths, many of which upon a second glance, look remarkably similar. We go to church, to sports clubs, look for support in the school community or through other activities and interests we pursue. From the outside, this can sometimes seem absurd and incomprehensible, but being part of a community offers security through inclusion.

Through my Veins
Moena Weiss

“The meeting of two personalities is like the contact of two chemical substances: if there is any reaction, both are transformed.” C.G. Young

The collages and the video installation represent what we humans can trigger in ourselves and in others.

I have heavily used the colour red as a symbol of life and liveliness. Blood keeps us alive; it is continuously pumped through the body and transports all possible coded feelings in the form of transmitter substances. The red threads symbolize veins running through our bodies. The fact that the “veins” are placed on top of the skin and that the faces are partially veiled with gauze fabrics illustrates the fragility inherent in these processes.

Looking at these pictures, we do not know what room we are in or, sometimes, whether it is a room at all. The Berlin photographer Andrea Wilmsen often does this in such detail or at such a short distance from empty walls that we sometimes imagine abstract or non-representational photographs. In B.ODE, she photographed the exhibition spaces of the Bode Museum on Berlin’s Museum Island in ever new perspectives, without reproducing the works of art on display. In an attempt to explore our basic perception of spaces, she chooses the immediate surroundings of sculptures and paintings. The series is not about the Bode Museum as such or the works of art exhibited there, but about museum spaces in general as a stage for certain objects that only become “museumized” through their presentation and contextualization there. In this way, she transforms the background with its often-overlooked details and spatial perspectives into surprising, sometimes almost “empty” picture motifs that seem to exist without a volume of space.