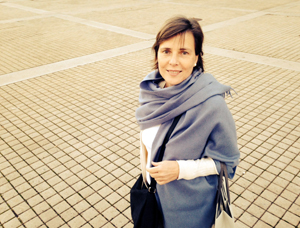 Christiane Stahl was born in Mannheim in 1963, and went to school near Stuttgart. After five years in Paris, she studied Business French and then Art History at École du Louvre. She finished her degree at FU Berlin under Prof. Dr. Eberhard König. Christiane Stahl received the Erich-Stenger-Preis from Deutschen Gesellschaft für Photographie for her dissertation on photographer and documentary film-maker Alfred Erhardt.

A former colleague of hers from Paris worked for Galerie Agathe Gaillard, where Christiane Stahl saw a wide range of black and white photography. She was always impressed by the precision and purportedly objective and true-to-nature fidelity photography could portray the outer reality. The discussion between objective and subjective interpretation in the creation of photographs still interests her, as no other medium apart from film, deals quite as closely with reality.

“Photography’s documentary
element is its greatest curse and
greatest asset.”

Christiane Stahl worked on the Bundeskunsthalle Bonn exhibition “Sehsucht. Das Panorama als Massenunterhaltung des 19. Jahrhunderts“, managing the gallery’s photography collection. She has worked for Galerie Karsten Greve in Cologne, Paris and Mailand, and in 2005 codirected festival “islandbilder” in Cologne. In 2010 she curated “Mikrofotografie” exhibition in Berlin and “Schönheit jenseits des Sichtbaren”. In 2011 she cocurated “Frontiers of Another Nature. Contemporary photographic art from Iceland” with Celina Lunsford at Frankfurter Kunstverein. From 2006 to 2014 she was a member of the board of directors of Deutschen Gesellschaft für Photographie, and deputy chairwoman as of 2008. Christiane Stahl has been director of Alfred Ehrhardt Stiftung since 2002.

From 2007 to 2008 she lectured at Universität Köln, and in 2011 to 2012 she taught History and Theory of Photography to final year students. Since then she is a regular guest at Neue Schule für Fotografie, where she regularly conducts worshops and seminars, giving students an insight into museum and gallery exhibition curating. She likes to help students to reduce the gap between ideas and realisation, and to better understand the rules of the art market. Christiane Stahl aims to transmit her personal philosophy through teaching, namely that the most important thing in one’s career, just as in one’s life, is to follow one’s passion, calling, strengths, and instinct.