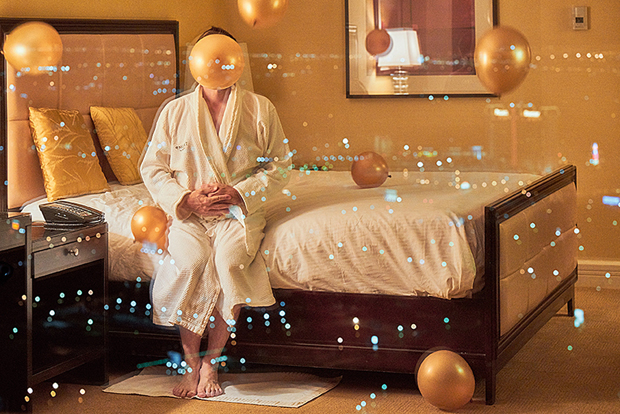 Gunnar Krüger, taken from the series “The Golden Age”

In #22 Morgen ist überall (Part 1) seven graduating students from Eva Bertram’s class at Neue Schule für Fotografie Berlin present their work. Transcending the genres they use, the students use photography as a personal means of expression to defend their own positions and spaces. Based on interests and experience, the photographers analyse their relationship with themselves and others, gaining insight into personal connections. “Photography is a form of self-defence” (Eva Bertram)

In the series “The Golden Age”, Gunnar Krüger interlaces the deceptive aspects of Las Vegas with the figure of Donald Trump. Documentary images and self-staging are testimony to a multiple seduction: that of the travellers, the observers, and the electorate.

In his work “Zwei. Eine Stunde”, Alexander Klang meets strangers in unknown places. In these improvised and unplanned meetings Klang searches for natural expressions, an intimate moment, an unexpected gesture, all in a reduced and graphic environment.

In “Was mach ich hier eigentlich?” Martin Scholz outlines a confused arrangement of personality, body, and place. In an anachronistic story told through still life and staged images, the individual and cold material play central roles forgoing any single message, leaving the viewer to extract their own conclusions from the past.

According to Melanie Bohn, “Zwei, ein Kampf” is a homage to her past, where each image is a piece of changeable identity, where self-staging, passion, physicality, motion studies and martial arts compete against gender specific classifications and dependencies.

In the work “Kleinod”, Tabea Przybilla concerns herself with the photographic depiction of her grandmother’s jewellery. In a figurative sense a jewel can be an inconspicuous object whose personal and sentimental value can only be recognised on second glance.

Tristan Barkowski photographs hip-hop artists and fans at concerts and behind the scenes. Both atmospheric and blunt, Barkowski’s images strip away the characteristic self-presentation of the music scene.