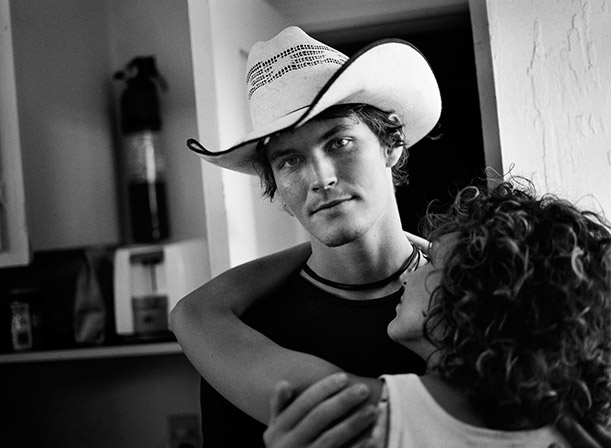 The aim of this workshop is to produce a series of photographic portraits that resonate with an intimate and honest authenticity. Students will be strongly encouraged to enter into the lives of their subjects and search for a moment of recognition and honesty. The aim is to gain access and come closer to the inner world of the subject through the use of the camera.

Just will present his ideas on artistic responsibility. How the „face to face“ encounter carries with it certain human responsibilities. Just will guide students in establishing a practical method of approaching, engaging and ultimately photographing a subject. Students will learn to recognize the difference between a document and an emotionally resonant image. Students will be encouraged to push themselves to uncover the small truths and to produce photographs with a sense of something „else“, something not staged but caught, with a certain depth.

Diligence will be stressed.

Just Loomis, a former assistant and longtime friend of Helmut and June Newton, and renowned photographer in Europe and the US, has worked for clients such as Harper’s Bazaar, New York Times Magazine, Italian and English Vogue, Warner Brother’s Records and various New York and European advertising agencies. Constantly working on his private images he eventually devoted himself to a fine art career and documentary portraiture. His collection of portraits spanning three decades was published in 2010, by Hatje Cantz, in the award winning book “As We Are” and shown at the Stenersen Museum in Oslo and Hiltawsky Gallery in Berlin.

“I am searching for something honest about my subjects…” (Just Loomis). In 2009 he exhibited in the group show “Three Boys from Pasadena” at the Helmut Newton Foundation in Berlin. The show has travelled to Paris, Cologne, Antwerp, New York and Los Angeles.